Addison Slater had dreams of a summer filled with pool parties and playing with friends. But it turns out, the 10-year-old’s heart just wasn’t in it.

“In our minds, everything was fine until this summer,” Addison’s mother, Alicia Slater, said. “And then all of the sudden, our daughter has a pacemaker.”

Addison passed out for the first time when she was just 2 years old. Three years later, it happened again, this time accompanied by a seizure. As Addison grew up, the episodes continued, and she also suffered from excruciating pain in her hands, legs and feet. She never seemed to have as much energy as her friends.

Slater took her daughter first to her pediatrician, then to a pediatric cardiologist who suspected Addison had Elhers-Danlos syndrome (EDS), a connective tissue disorder often associated with heart problems. A geneticist confirmed the diagnosis of EDS and Addison was referred to see a pediatric electrophysiologist at the UF Health Pediatric Cardiovascular Center, affiliated with Wolfson Children’s Hospital.

By the time Addison was scheduled for her follow-up appointment, a new pediatric electrophysiologist, Sunita Ferns, MD, had joined the Pediatric Cardiovascular Team. Dr. Ferns is the director of the Pediatric Invasive Electrophysiology Program at Wolfson Children’s Hospital and the UF Health Pediatric Cardiovascular Center. Concerned that Addison started experiencing fainting spells so early in life, Dr. Ferns scheduled a tilt table test for the very next day.

In a tilt table test, a patient is secured to a table while lying down. The table then slowly tilts up to a standing position to see how the heart responds.

“During the test, her heart rate dropped from the hundreds to the low thirties, and I could barely feel her pulse,” Dr. Ferns said. “This is very rare, especially in children, and is called cardioinhibitory syncope. That means something is slowing the heart rate. If your heart’s not beating, there’s no blood flow going to your brain. Without blood to your brain for a period of time, it starts to get less oxygen and then the child may have life-threatening seizures.”

“It was like this huge wave just crashed down on us,” Slater said of receiving the news about Addison.

The solution for cardioinhibitory syncope is a pacemaker, but both Dr. Ferns and Addison’s parents wanted to delay surgery until it was absolutely necessary. In the meantime, Dr. Ferns outfitted Addison with an injectable device called a loop recorder, which relayed real-time data to software that Dr. Ferns could access at any time.

From fine to frightening

For the first few weeks, Addison didn’t have any concerning episodes where her heart rate dropped dangerously low. Addison was doing well enough that Slater took both her and her young son, Sullivan, on a family trip to Alabama. That’s where things took a frightening turn.

“Addison was exhausted after the day of travel and her legs and feet were hurting, so I suggested we try some pressure points we had learned to relieve the pain,” Slater said. “I just touched her ear, and she passed out. It was the worst episode she had ever had. Her freckles disappeared, the color in her lips disappeared and her whole body went white. Then she had a seizure and she wouldn’t wake up.”

Because Addison was outfitted with the loop recorder, Dr. Ferns was able to immediately pull up her heart data.

“Addison’s heart paused for five seconds and the seizure was caused by lack of oxygen to her brain,” Slater said. “Her pulse after that was around 15 beats per minute.” That’s an average of one beat every four seconds, which can be deadly.

On pace for a healthy future 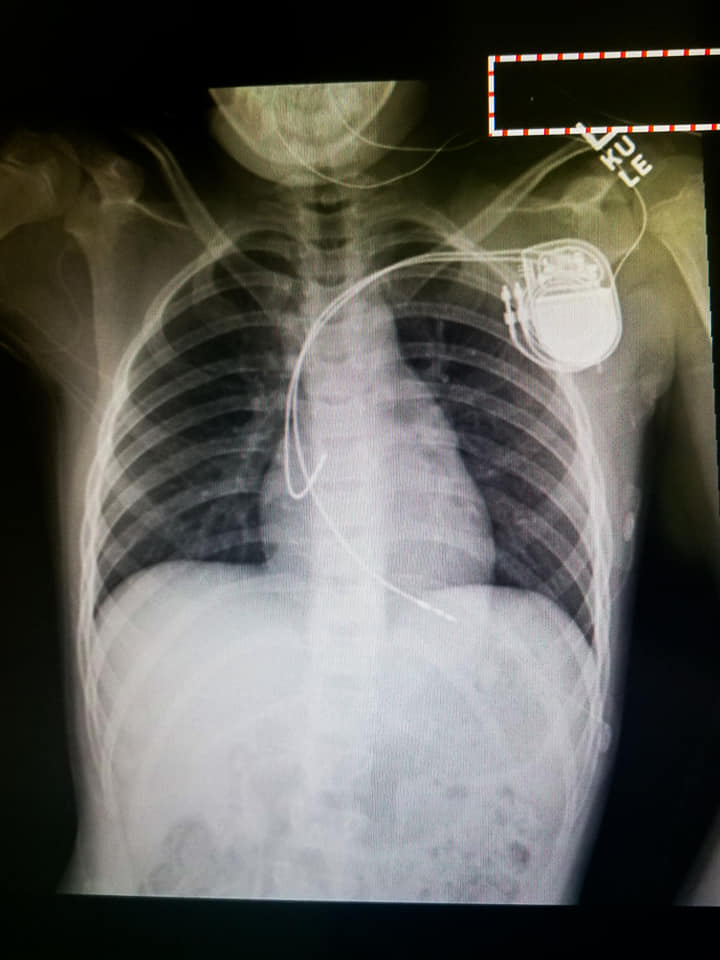 In early July 2019, Dr. Ferns performed surgery at the Cardiac Catheterization Lab at Wolfson Children’s Hospital to place Addison’s pacemaker. When putting in the pacemaker, Dr. Ferns had to make sure the leads – the wires connecting the device to Addison’s heart – were long enough to accommodate Addison’s growing body over the next several years. Addison was able to go home after an overnight stay in the Wolfson Children’s Cardiovascular Intensive Care Unit.

“I chose a unique algorithm for Addison’s pacemaker that detects changes in her heart contracting before the heart rate actually drops,” Dr. Ferns said. The pacemaker is set to activate when Addison’s heart rate drops below 50 beats per minute. It is currently triggered about 50% of the time, demonstrating how badly Addison needs it.

“My hope is that as she grows, she might outgrow her symptoms,” Dr. Ferns said. “The hope is that, with this state-of-the-art pacemaker, she will never experience the scary symptoms she had on vacation again.”

While Addison has to recover from the heart procedure itself, she shouldn’t have any long-term limitations from the pacemaker. In fact, it should allow her to have the energy to keep up with her friends. For Slater, the pacemaker provides peace of mind that her daughter will be okay.

“If Dr. Ferns hadn’t done that tilt table test to realize how bad Addison’s condition really was, my daughter might have gone to bed one night and not have woken up the next day,” Slater said.