‘It shaped my whole life’

Can you pinpoint a single event that has defined your entire future? For Rebecca Schrum, now 24 years old and a social worker at Baptist Medical Center South, that defining life event was her fight with brain cancer.

“I would probably not be in the career I am today, I wouldn’t have met my husband, it would have been such a different life,” Schrum said. “And I wouldn’t change it for anything.”

In the weeks leading up to March 14, 2009, Schrum had been having terrible headaches and nausea. That evening, then-13-year-old Schrum she was playing hide-and-seek outside at a friend’s house when she started feeling sick, and needed her friend’s help to make it to the front porch.

“My dad came and picked me up right away,” Schrum said. “We passed Baptist South on the way home and my dad asked me if I thought we needed to go, but I was kind of stubborn and said I just wanted to go home.”

“As soon as I got home, I started projectile vomiting,” Schrum continued. “My mom is a nurse and she said she’s never seen that much vomit before. So as soon as my mom got me cleaned up and dressed, we went to Baptist South.”

Though much of that night is a blur, Schrum remembers certain snapshots: a waiting room, her parents’ concerned faces, and the doctor entering an exam room with what would be life-changing news.

“Once the doctor came into the room, everything was in slow motion,” she said. “He told us they found a brain mass on the CT scan. I remember, in what seemed like slow motion, my parents looking at each other and grabbing each other’s hands, and then slowly looking at me and grabbing my hand. And then their eyes began to water. Immediately after, I was on an ambulance on my way to Wolfson Children’s Hospital.” 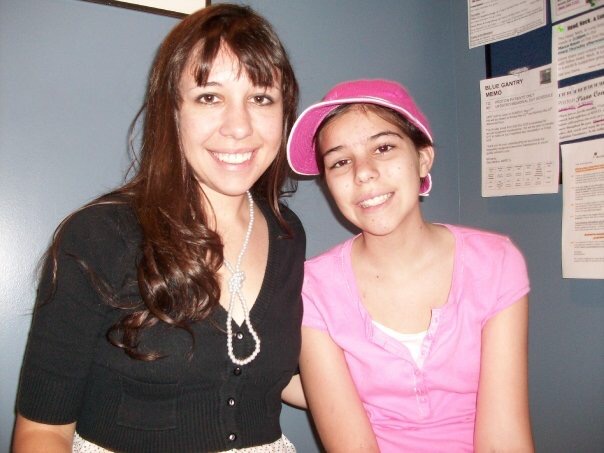 Schrum spent two weeks in the Wolfson Children’s Pediatric Intensive Care Unit. Surgery was followed by 15 months of chemotherapy and six months of radiation, along with proton therapy. Each person Schrum met inspired her along the way.

“Throughout my treatment and the time after, it kept motivating me to want to use my past to do something in the medical field and it led me to social work,” she said. 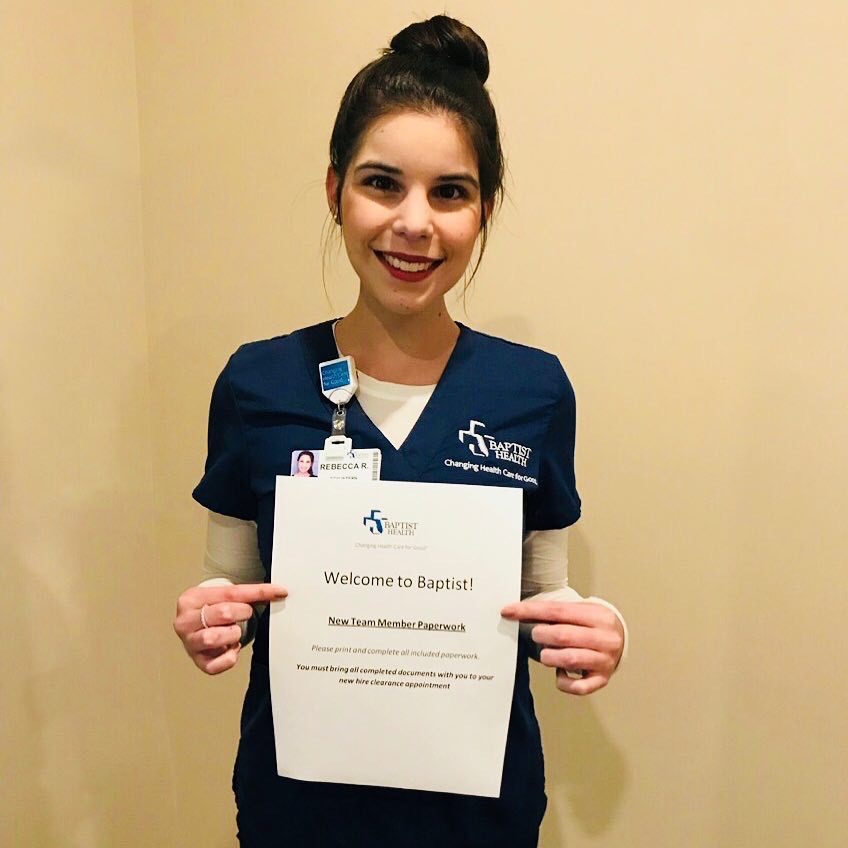 Just a couple years after Schrum finished treatment, she decided to start her career giving back to the people who helped her get through her cancer fight, as well as those going through their own health battles. It began with a position volunteering at the gift shop at Baptist South, the same place where she found out about her tumor.

“Going back to where I was diagnosed for the first could time was a little eerie, but once I started, it was amazing,” Schrum said.

One moment, in particular, sticks with her all these years later.

“This one woman came into the gift shop and was sobbing,” Schrum recalled. “She just opened up to me and told me how her husband was in the ICU and was not going to make it through the night. She was looking for something to help tell her son that his father was going to pass away that night, but would also provide him comfort. She told me all about her husband and what a great father he was. She was giving me this precious time that she could be spending elsewhere and trusting me with this information. It just meant so much.”

Schrum went on to study social work in college. In order to receive her bachelor’s degree, she needed to complete an internship, which she did at Baptist Medical Center Jacksonville. About a month before the internship ended, she accepted a position as a social worker with Baptist Health, initially assigned to the Neuro ICU and Progressive Care Unit (PCU) at Baptist Jacksonville. 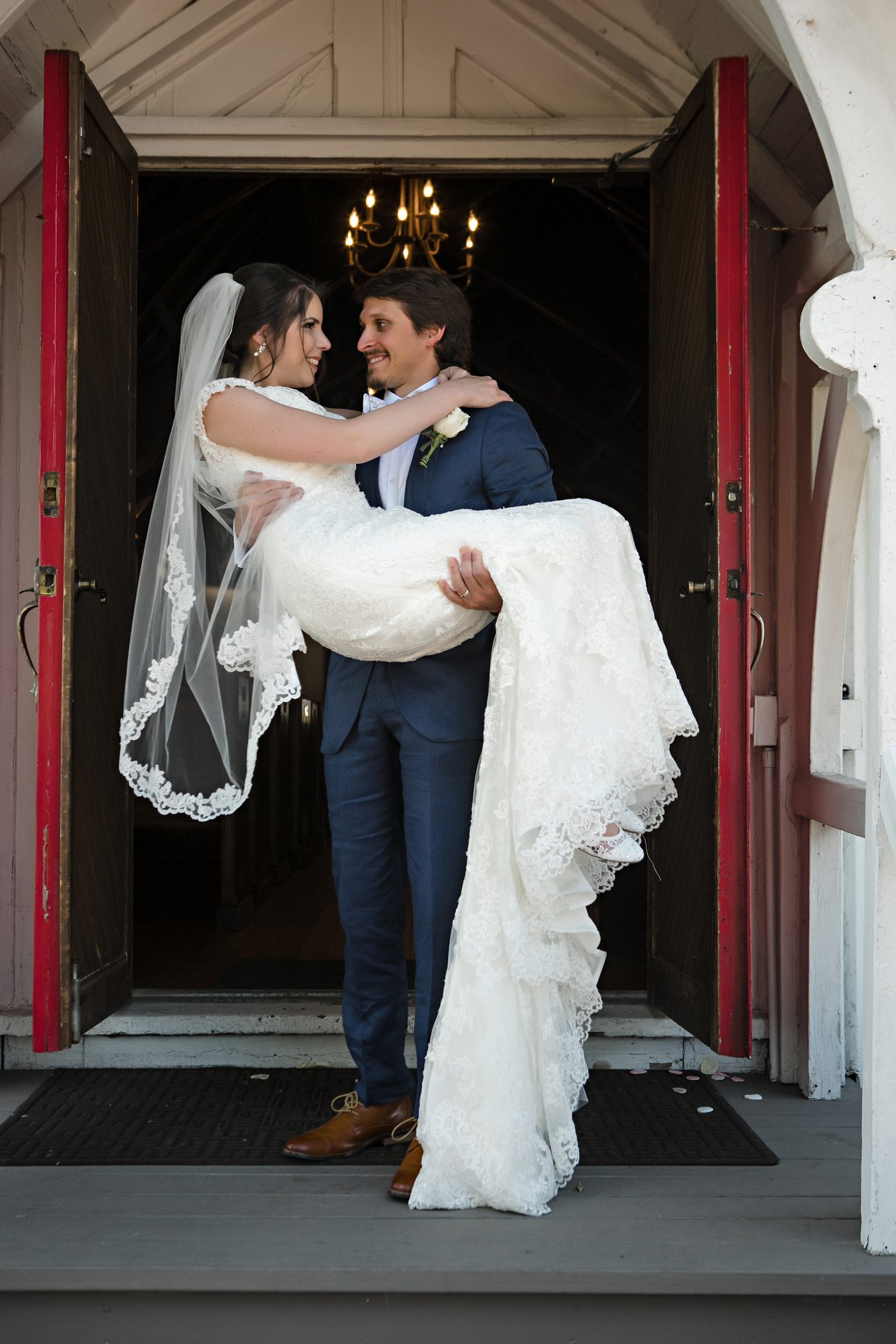 One day, as she was eating lunch in the first floor café of Baptist Jacksonville, Schrum was approached by a man named Michael, who was a medical student at the time.

“He just sat down with me and we started talking,” she said. “We exchanged phone numbers and six months later, we were engaged; six months after that, we were married!”

That, alone, sounds like the start of a lasting love story. But months into their courtship, it seemed more like destiny that Michael and Rebecca found each other.

“We were discussing our parents’ occupations,” Schrum said. “His dad is an allergist at Nemours Children’s Specialty Care, Jacksonville, and his mom is a pediatric anesthesiologist at Wolfson Children’s, and I thought that was interesting. So I looked back at my medical records, and come to find out, she was the anesthesiologist for my tumor resection.”

Schrum transferred from Baptist Jacksonville to Baptist South in November 2019. She is currently working on getting her master’s degree from Florida State University, with the ultimate goal of being a social worker on the pediatric hematology/oncology floor at Wolfson Children’s.

In January 2020, Schrum checked off another milestone as she crossed the finish line of the Wolfson Children’s Challenge 30K race with Michael and her father, David.

“I loved being able to see those faces and read those names along the way,” she said of the signs featuring Wolfson Children’s patients along the race route. “It was so inspiring.”

With the race now behind her, Schrum is turning her attention toward the future and continuing the purpose she discovered over a decade ago.

“My cancer battle has shaped me in every way,” she said. “It has made me the person I am today.”

The Stys Neuroscience Institute at Wolfson Children’s Hospital diagnoses and treats patients with a wide range of neurological conditions, from epilepsy to brain tumors and more. To learn more, call 904.697.3600 for Neurology or 904.633.0780 for Neurosurgery.

Lucy Rose up to fight cancer

‘It shaped my whole life’