Quick relief for a problem nobody wants to talk about

Women suffer in silence with incontinence, but a minor procedure can make a major difference.

Bea Hinton was tired of not being able to go anywhere. Her incontinence was getting progressively worse and she felt safer at home, where nobody would notice her problem.

“Every time I sneezed, laughed or coughed, I wet myself. I was running to the restroom constantly, so I stopped going places unless I absolutely had to,” said Hinton. It got even worse when her allergies kicked in, causing spontaneous coughing spells.

Bladder surgery in 2005 had not solved the problem, and Hinton thought she had run out of options. “It didn’t work the first time, so I was hesitant to try again,” she said. “I was missing out on so much.”

After 10 years of frustration, Hinton’s primary care physician sent her to see urogynecologist Lee Epstein, MD, who specializes in pelvic floor disorders and is on the medical staff at Baptist Medical Center Beaches.

“About a quarter of all women in our country suffer with at least one pelvic floor problem,” said Dr. Epstein, who is dual board-certified in gynecology and female pelvic medicine and reconstructive surgery.

For women older than 60, the number of women with pelvic floor problems rises to 40 percent, he said. The most common conditions are urinary frequency, urinary or fecal incontinence, and pelvic organ prolapse (commonly called fallen bladder or bowel).

“The majority of women with these types of conditions suffer in silence,” said Dr. Epstein. “Many are too embarrassed to bring it up to their doctor. Other women think these conditions are just a normal part of aging, but they are not.”

For Hinton, Dr. Epstein recommended a procedure to implant a suburethral strap that acts as a new support for the urethra to prevent urine leakage. With a 90 percent success rate, almost no scar and very little down time, she was sold. 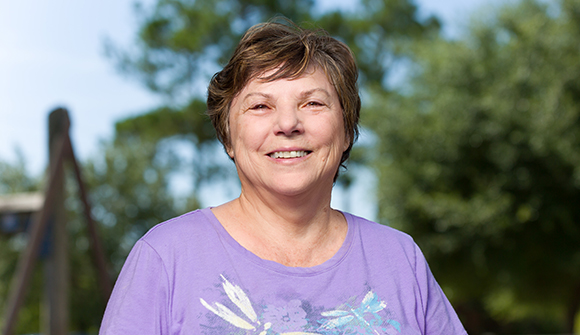 Hinton had the 20-minute procedure as an outpatient and went home that same day with a catheter that doctors removed the next day. She was also restricted from strenuous activity for a few weeks.

The best part for Hinton was the immediate improvement. “I noticed a difference the very next day,” she said, adding that she did not experience much pain at all.

“The first week or two after the procedure, I would worry. I was so afraid it would happen again,” she said. Soon, her confidence grew and she was able to enjoy activities she had abandoned: playing with her grandkids, walking on the beach and even simple, everyday things like shopping.

“This is a minor procedure that makes major difference in a woman’s life,” Dr. Epstein said. “There are effective treatments for most pelvic floor disorders.”

To women who are unsure or embarrassed about this issue, Hinton recommends seeing a urogynecologist like Dr. Epstein. “I just wish I had done it sooner,” she said.