Retired train conductor back on track

Sammie Starling spent more than 35 years with the railroad, 25 at a busy freight yard in northwest Jacksonville where he uncoupled train cars, bled brake lines and supervised switching crews. He capped his career as a conductor on “through” or non-stop freight trains.

“I can almost see the switching yard from here,” said Starling as he gazed out a window on the fourth floor of the Heart Hospital at Baptist Medical Center Jacksonville, where he recently underwent a new minimally invasive heart procedure.

“I worked in the yard for 25 years breaking up trains into different classifications. It was a lot of walking. When a doctor told me to get off my knees, I rode through freights from Savannah to Jacksonville. That was before they started phasing out the caboose.”

Starling retired from the railroad in 2001. He traveled the country in a motorhome after that, once spending six months in Alaska. He stopped traveling after his wife of 34 years died in 2016. Soon afterward, Starling started feeling weak and out of breath. It got to where he couldn’t walk his dogs or walk to the street to check his mail.

“I even had trouble getting out of bed in the morning,” said Starling, who had a pair of open-heart surgeries in 2009 to replace both his aortic and mitral valves, and was told he would never survive a third open-heart surgery. “My cardiologist told me I might be a good candidate for another surgery where they don’t have to cut your chest open. That got my attention right away.”

The new procedure, known as Transcatheter Mitral Valve Replacement (TMVR), involves placing a new mitral valve in the heart by threading a catheter through a main vein in the leg. The third-generation device (Edwards SAPIEN 3) is commonly used to replace worn-out aortic valves, but recently was approved by the Food and Drug Administration to replace faulty mitral valves as well. 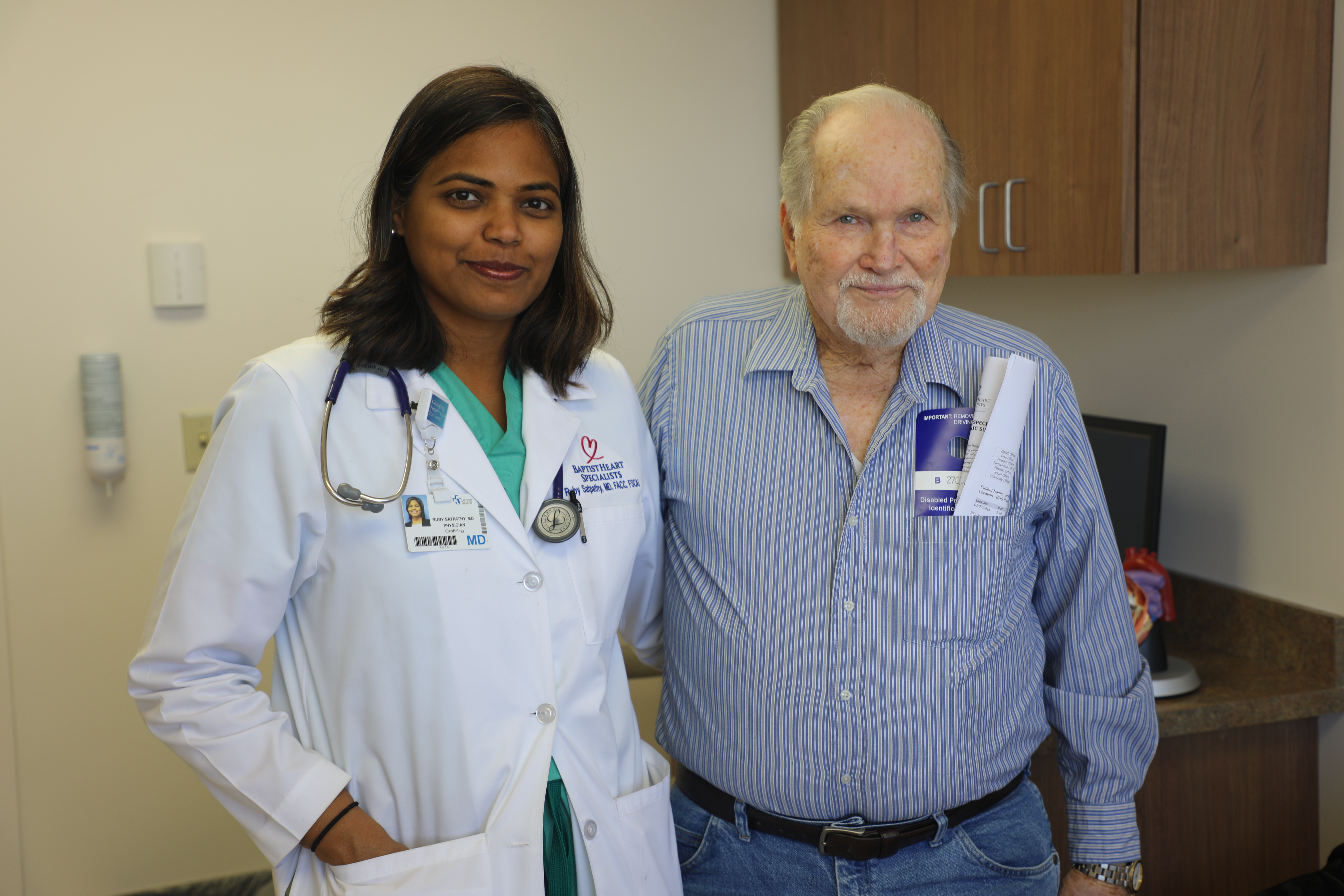 Starling, 80, was the first patient at Baptist Jacksonville to undergo TMVR.

“There are no incisions in the chest and no incision in the groin,” said Starling’s interventional cardiologist, Ruby Satpathy, MD, director of the Structural Heart Program at Baptist Jacksonville. “I do what I call a ‘magic stitch’ to close the vein. Mr. Starling was originally scheduled to have the procedure later in February, but we moved it up after his condition worsened. After I performed the surgery, he felt significantly better right away and went home in two days.”

Dr. Satpathy specializes in a number of minimally invasive procedures, namely MitraClip® to reduce blood leakage in the mitral valve, TAVR, to replace the aortic valve, and WATCHMAN™ and LARIAT® for patients with atrial fibrillation who are at a high risk of bleeding and stroke. Baptist is also taking part in a number of randomized control trials, both nationally and internationally, including one that combines WATCHMAN™ and TAVR.

“A lot of people have aortic valve problems who can’t take blood thinners. In this new trial called WATCH-TAVR, patients will have WATCHMAN™ at the same time as TAVR,” said Dr. Satpathy, adding that Baptist was chosen to take part in the study due to its high volume of TAVR and WATCHMAN™ surgeries. “I’ve personally performed about 1,000 TAVR procedures in my career, and I’ve been doing TAVR with twilight sleep (no general anesthesia) since 2014. This allows the patient to go home within 24 or 48 hours after treatment.”

Before his TMVR procedure, Starling could barely walk without getting winded. Two days after the surgery, he was walking around the nursing station and up and down a flight of stairs.

“I’m a different man now than when I walked in here,” added Starling, who enjoys hunting and fishing in the Osceola National Forest about an hour west of his Jacksonville home. “You don’t need a license to hunt deer at my age. I hardly ever see one, but I like to get out there anyway.”

The Structural Heart Program at Baptist Health is comprised of interventional cardiologists and cardiothoracic surgeons specializing in the diagnosis and treatment of conditions affecting the values and vital structures of the heart. To make an appointment with a Structural Heart scheduler, call 904.202.9500.

‘They brought my husband back to life’