It was a Thursday morning and Debbie Haynam was excited for her son, Brian, to arrive. She was busy getting everything ready at her home on Amelia Island, as moms are known to do, even when their children are all grown up.

The next thing she knew, she was lying on the kitchen floor. Haynam remembers seeing her sandal dangling off her foot and not being able to get it back on, no matter how hard she tried.

“I wiggled across the tile until I made it to a chair, and somehow hoisted myself up to it,” she said. When her son arrived, he found his mother sitting in the chair looking confused. His hello was greeted by silence; Haynam wasn’t able to speak.

“I knew my son was there,” she said, “but I couldn’t respond to him.” Fortunately, he knew exactly what to do, and called 911 immediately.

When Haynam arrived at Baptist Nassau’s ER, the medical team was ready and prepared to care for her.

“Debbie couldn’t speak and didn’t comprehend our questions,” said Baptist Nassau emergency physician Annette Bell, MD, who rushed Haynam immediately to the CT scanner to get images of her brain.

Dr. Bell was able to connect with Nima Aghaebrahim, MD, a neurointerventionalist at Baptist Stroke & Cerebrovascular Center in Jacksonville, through TeleStroke a virtual way to assess patients with stroke symptoms. He was able to see Haynam in real time and also immediately view her CT scans.

“There was an obvious blockage on the left side of her brain, cutting off the oxygen supply,” said Dr. Aghaebrahim. “I could see that she had weakness on her right side and difficulty speaking. The clot needed to be removed as quickly as possible."

Within minutes after Dr. Aghaebrahim confirmed her condition, Haynam was on the LifeFlight helicopter headed to downtown Jacksonville.

When she arrived, the entire stroke team at Baptist Stroke & Cerebrovascular Center was waiting, ready to spring into action. She was whisked into the operating room where Dr. Aghaebrahim began an emergency thrombectomy to save her life.

A thrombectomy is a procedure to remove a blood clot in an artery and restore blood flow along with oxygen back to the brain.

“As we did with Debbie, thrombectomies are usually performed by going through the femoral artery in the groin and guiding a catheter up to the clot in the affected area in the brain,” said Dr. Aghaebrahim. He was then able to apply suction to aspirate the clot.

“When I woke up in the recovery room, I had no idea what had happened,” Haynam said. “They were asking me questions – what day it was, how old I am -- and I was able to answer them easily. My husband told me I had suffered a major stroke. I couldn’t believe it.”

Stroke is the No. 1 cause of disability, and time is crucial when it comes to stroke.  A person loses an estimated 1.9 million brain cells in the first minute of a stroke. Every minute a stroke goes untreated can mean an extra week of recovery.

Yet, many people are still delaying emergency care in light of COVID-19. Emergency department visits are down 42% across the U.S. due to COVID-19, according to the CDC.

“For Debbie, delaying care could have resulted in long-term or permanent disability on the right side of her body and problems with speech and language,” said Dr. Aghaebrahim. “That’s why calling 911 immediately is necessary if you notice stroke symptoms.” 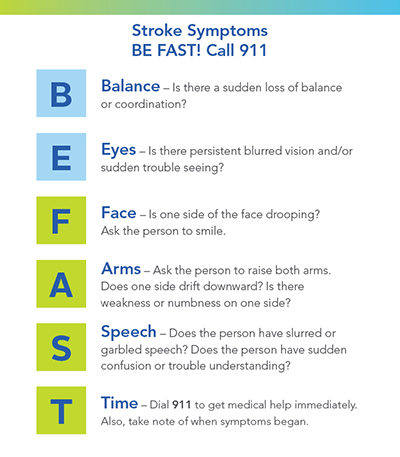 Baptist Stroke and Cerebrovascular Center’s treatment times are faster than national averages to help ensure the best possible outcomes for our patients.

“In Debbie’s case, it was less than 90 minutes from the time she arrived at Baptist Nassau’s ER until I began her procedure,” Dr. Aghaebrahim said. This included transporting her by LifeFlight from Baptist Nassau to downtown Jacksonville.

“Quick care played an important role in Debbie’s recovery because restoring blood flow rapidly is the key to a good outcome when it comes to a stroke with a large vessel blockage,” Dr. Aghaebrahim said.

“This can only happen with great teamwork between Emergency Medical Services, our ER team members and our neurovascular team,” he said. ”It’s important to know that not all hospitals are equal when it comes to stroke treatment. At Baptist Health, we have protocols in place for rapid and effective care for patients like Debbie, along with excellent surgical and post-operative care.”

A stroke can happen to anyone

Haynam’s friends and family were surprised she suffered a stroke; she is a healthy and active retiree who enjoys playing tennis, running and Jazzercise.

“Unfortunately, a stroke can happen to anyone at any age. Debbie had atrial fibrillation, and at the time of her stroke, she was not taking blood thinners. So, despite her being otherwise healthy, she was at high risk for stroke,” Dr. Aghaebrahim.

“I feel really proud of the care that we as a team provided to her. I am grateful for the trust she and her family placed in us, and I am so happy that she is well again,” Dr. Bell said.

“In this time of COVID-19, we have taken great care to ensure that the ERs and other departments in our hospital are safe and equipped to provide safe and excellent care.”

Haynam is relieved she has no disabilities resulting from her stroke, and is getting back to her normal activities – like walking her dogs, doing yard work and swimming. She hopes to return to the tennis court soon.

“Make sure that people around you know the signs of a stroke and know to call 911 right away,” Haynam said. “My son knew what to do and he really saved my life.”

Stroke symptoms include face drooping, arm weakness, difficulty with speech, sudden loss of balance or coordination, and sudden vision loss or double vision. Baptist Health ERs have a separate area for patients who are experiencing stroke symptoms. Call 911 or go to the ER immediately – time is brain when it comes to stroke treatment.