Crossing Jacksonville’s Acosta Bridge on foot isn’t an easy feat. The 1,645-foot-long bridge over the St. Johns River has a steep incline on both sides. That didn’t stop Rufus McClure from setting a goal to cross the iconic landmark in celebration of his 97th birthday.

McClure’s dedication to physical fitness was born out of necessity.

“I turned 18 during World War II and wound up in uniform,” he said. “I was a paratrooper. They taught me how to pack parachutes and jump out of airplanes.”

McClure was part of a special division that was trained to invade Japan. On many occasions, he ended up in the right place at the right time.

“I was in Europe when President Harry Truman gave the orders to drop atomic bombs on Hiroshima and Nagasaki,” he recalled. “After that, the war was over. Instead of getting shipped to Japan to possibly be killed, I got to go back to New York and party.”

Walking the bridges was McClure’s way of staying active. 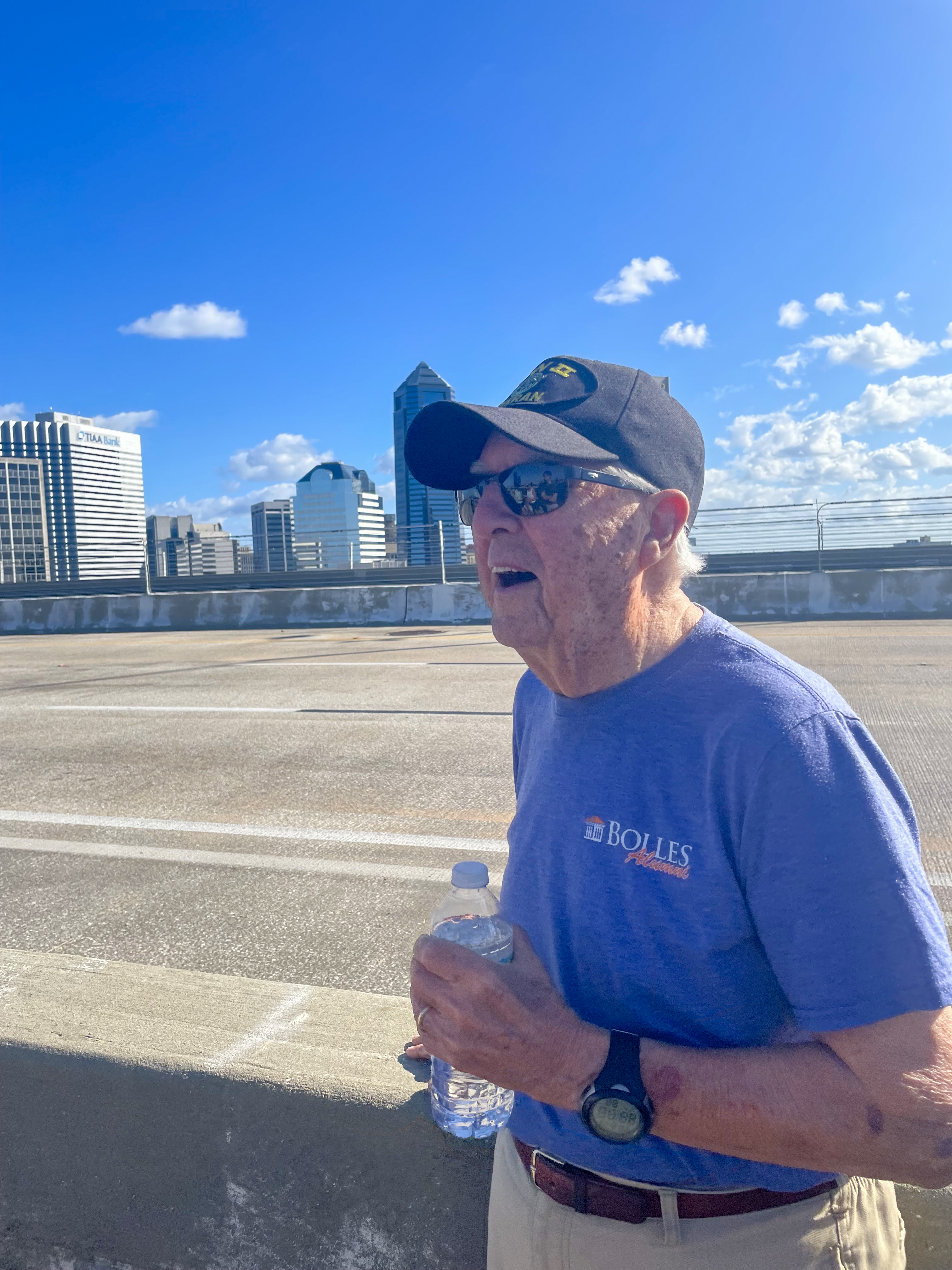 “TAVR is a minimally invasive procedure in which the new valve is inserted into the heart through a flexible tube called a catheter,” explained Dr. Satpathy, who has been doing TAVR procedures for 15 years. “It takes less than one hour and patients are walking four to six hours after the valve replacement. They go home in a day or two! Most importantly, we avoid the need for open-heart surgery.”

Following surgery, McClure began attending cardiac rehabilitation to get back to maximum health.

“He set the goal of crossing the Acosta Bridge for his birthday about 30 days prior,” said Mary Condorodis, cardiac and pulmonary rehab coordinator at Baptist Health. “He has such amazing exercise ambitions. We all really stepped it up once he set the birthday goal and started making sure he was doing incline during his time on the treadmill to prepare.”

On McClure’s 97th birthday, a crowd of nearly 30 people, including his children, grandchildren and Baptist Health caregivers, gathered at the base of the Acosta Bridge.

To kick off the walk, McClure, a former teacher for over 50 years, declared, “Class is in session!” and everyone began the climb.

McClure and his supporters reached the top with ease and began the descent. On the other side of the bridge, a crew from Jacksonville Fire and Rescue Department was there to honk the fire engine’s horn in celebration. The firemen offered McClure a ride back over the bridge but he answered, “Thank you, but I’ll walk,” once again showing his determination.

McClure began his second ascent of the Acosta Bridge, keeping his steady pace.

Cupcakes, champagne, cowbells and cheers were waiting for him on the other side.

“Now we have to come back next year for your 98th!” exclaimed McClure’s son, Matthew. McClure agreed he would be back and even plans to cross to celebrate his 100th.

While the birthday crowd was big, McClure was deeply missing the person who had been by his side for many bridge walks and all of life’s ups and downs. His beloved wife, Mariam Akra McClure, recently passed away.

Her funeral took place on the couple’s 66th wedding anniversary.

“She was a Jacksonville girl and the reason I stayed in this city all these years,” said McClure. “The first time we met, our eyes locked and that was it. We got married on Jan. 6, 1956. We had an absolute storybook marriage and family. We had a beautiful romance.”

“We knew she was there at the top of the bridge,” said Carolyn Stift, McClure’s cardiac rehabilitation therapist. “She was there in spirit.”

McClure’s bridge-crossing dreams aren’t over. His eyes are set on being the oldest person to cross the new Fuller Warren Bridge pedestrian and cycle path when it opens later this year. His cardiac rehab team is committed to helping him reach this goal.

“You don’t come across people like Rufus every day,” said Condorodis. “I’m amazed by him.”

Baptist Heart Specialists has more than 30 board-certified cardiologists to provide patients with an unmatched range of services and expertise in heart care so patients can get back to doing the things they love, like walking the bridges! To learn more, visit baptistjax.com/heart or call 904.720.0799.